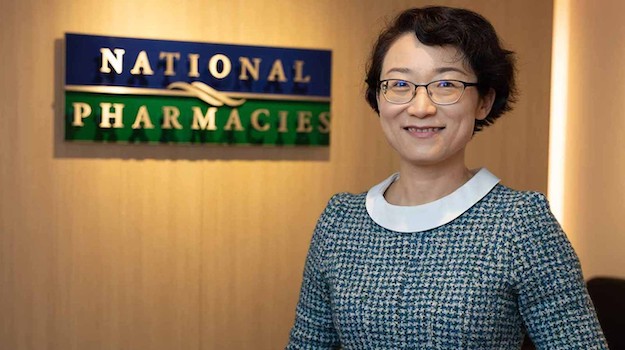 As an ACCA Australia and New Zealand panel member in 2012, Vivian Liu hoped to engage members from South Australia by starting a monthly social get-together at an Adelaide pub.

Month after month, no one came, but still Liu persisted. And, when a few members or students started trickling in, she realised what was keeping them away.

A meet-up in the central business district of Tianjin in mainland China (Liu’s birthplace), or Singapore, where she’d recently lived, might be convenient for professionals working in those cities, but not so given the broader geography of her adopted home of Australia, where business districts are decentralised. Besides, she learned, members wanted more than just chit-chat.

So, Liu changed tack and asked ACCA’s Australia and New Zealand office to organise some relevant CPD sessions for South Australian members, which were well attended.

Adapting to meet the need at hand is a strategy in which Liu, financial operations manager at National Pharmacies, a community healthcare provider for over a century, is well versed.

A talented STEM student at school, Liu had always enjoyed maths and science subjects, which led her to study engineering at university. After graduating, she landed a project management job in Singapore, but a year in decided it was ‘probably time for me to do further study to get a better job and career’.

An MBA seemed a likely career-change pathway, and Liu began that in tandem with her day job. When the company’s accountant left and the role became vacant, Liu volunteered to put the new-found learnings from her MBA financial syllabus to the test by taking over the bookkeeping.

She ended up doing the company’s year-end reporting and when an external auditor gave her work the all-clear with no issues, Liu was excited. ‘I realised I was good at accounting,’ she says. ‘I could see my future: as an accounting professional, if I did well, I could progress to CFO. It was a very clear career path for me.’

Both her workplace’s former accountant and the company’s external auditor were ACCA members, and when Liu consulted them on her options, their advice resonated. ‘Without a second thought, I enrolled in ACCA before finishing my last MBA exam.’

Her hard work soon paid off.  ‘Before achieving my ACCA Qualification in March 2007, I landed a job with one of the Fortune 500 companies with regional headquarters in Singapore,’ Liu recalls. ‘There, I progressed from a junior accounting position to senior accountant within a year. Once I was on the right track, everything just accelerated.’

Meanwhile, as a dutiful daughter, Liu acquiesced to her mother’s entreaties that she should be married by now and a husband deemed to be suitable was identified for her.

Less than three months after the match was made, the couple’s marriage was registered. And when her husband declared he wanted to move to Australia, Liu felt she had no choice but to agree, even though it meant giving up her promising CFO pathway.

Finding that it wasn’t easy for a new immigrant to secure employment, Liu resolved to adapt by studying job ads, tailoring her resumé to each position and talking to recruitment agencies ‘to make myself visible on the job scene’. To familiarise herself with Australian culture, she also volunteered at various community organisations.

An offer of a senior accountant role at a wine company was accepted but, after a few years and a period of soul-searching, Liu yearned for a role that would reignite her passion. When National Pharmacies needed a project leader to implement its new enterprise resource planning system on a one-year contract, Liu applied.

At the initial interview, Liu discovered that National Pharmacies – with 50 pharmacies, 20 optical stores and hearing aid service alliances in South Australia, Victoria and New South Wales – is a not-for-profit organisation that exists to benefit members. ‘That made the job more meaningful for me,’ she says.

Established in South Australia in 1911, National Pharmacies is a mutual organisation where profits made through operations are returned to members in the form of benefits and discounts.

With more than 850 employees, the organisation serves some 250,000 members and supports 68 community organisations, through its pharmacies and optical stores in South Australia, Victoria and New South Wales.

‘Not only would it help my career to be part of an organisational transformation that made the business more successful in the future, but I’d also be contributing to broader society through healthcare.’

Despite more than a century of successful trading, a confluence of factors meant that the business was facing diverse challenges. Technology was disrupting the industry. Government changes to the Pharmaceutical Benefits Scheme reduced subsidies and impacted profits. Some very aggressive competitors entered the space, with discounting their main selling point.

There was also an internal roadblock. Many of National Pharmacies’ staff had been with the organisation for decades: though loyal, not all were amenable to change.

However, in order to survive, tough decisions were required. Explains Liu: ‘The business needed to undertake a restructuring, and bring in new technology to make the operation more efficient.’

Rather than joining the price war, which Liu says was ‘not sustainable’, National Pharmacies pivoted its business model to premium value-added services.

‘Even though people have become more cost-conscious, the majority value the services provided by the pharmacists,’ she explains. ‘After extensive market research, management decided that was our proper position. Prestige skincare products, professional advice for patients and additional natural health services became our strategic focus.’

Months into her contract, Liu was offered a permanent role as finance operations manager, followed by a promotion to senior manager finance in 2022. Charged with pushing forward the project implementation and leading the financial transformation of the company, there were tough decisions to make.

‘The executive leadership made the difficult call to let go of the majority of the finance team, which was approved by the board,’ she explains. ‘We recruited a new team with skills and an open-minded approach.’

This was followed by an intense year training staff and implementing the new processes. ‘There were bugs and fixes, which needed to be ironed out but, as expected, the system provided the improved process efficiency from the supply chain to the back-end transactions, and strengthened internal control across stock movement and financial processing,’ Liu says.

After going live in February 2018, the system has led to improvements in other areas. Human error is reduced, delivering efficiencies in the front-end staffing as well as to the annual reporting.  ‘Even today, we are still improving the process – it’s non-stop,’ Liu says.

Liu’s term as an ACCA panel member ended in 2017, just before she joined National Pharmacies. She’d achieved a lot in engaging South Australian members, facilitating CPD events on hot topics relevant to their work, and mentoring those just starting out.

On a personal level, though, that last year was tough, with the stress of a divorce and job uncertainty taking a heavy toll. ‘It was the darkest time in my life,’ Liu shares. ‘But I held out hope and had confidence in my self-worth.’

Being a panel member helped her get through. ‘Every time I attended a panel meeting, it was like an injection of positive energy into my bloodstream,’ she says. ‘I felt I was not alone in Adelaide, struggling.’

During that period, Liu also reached out to her ACCA network, receiving mentorship and coaching from fellow panel member Brendan Sheehan, CEO of White Squires and now a member of the ACCA Global Council, whose counsel Liu credits with helping to secure her current position.

‘I’d wanted to progress, but didn’t know how,’ she says. ‘Brendan was generous in offering me guidance on planning my career path, and setting up my vision and strategies I could apply.’

Liu continues to mentor young members, explaining: ‘ACCA gave me so much, I like to give back.’

Today, life is good. ‘I’m really happy where I am now – even the hard lessons, the pain in the path, I really appreciate that. It’s part of my life, part of me,’ Liu reflects. ‘I know I am worthy; I know I am capable. I just follow my passions and keep the confidence level high.’

As for her daughter, a baby when they moved to Australia, now aged 12 and a talented ballerina, Liu is determined that she will choose her own path.

‘All the major decisions now, I let her make,’ she says. ‘I provide advice, but I tell her to follow her heart. My daughter will not be cast into any mould, just because it is what’s expected.’