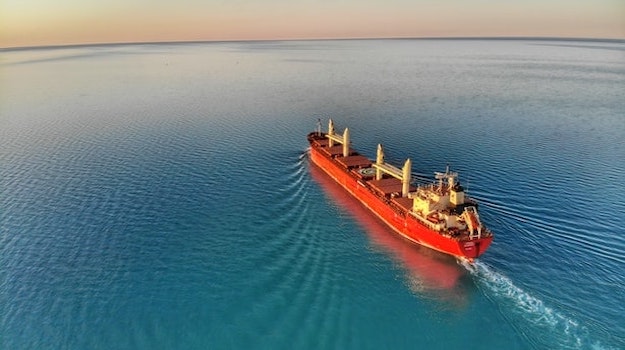 The dissolution of the Soviet Union in 1991 effectively marked the start of Evgeny Buben FCCA’s career in finance – one that has spanned continents and industries. Born in Belarus, he is now settled in Greece, as CFO of SAM Shipping. The group operates a fleet of 10 dry bulk carriers that ship goods such as coal, iron ore, soybeans and wheat around the world.

Buben’s story exemplifies the link between success and self-development. Throughout his career, he has taken calculated risks, gained international experience, looked to acquire new skills and knowledge, and deliberately sought to challenge himself. He has also applied the principles of his hobby – chess – to his professional life. ‘Chess is about thinking logically and creating different scenarios for the future,’ he explains. ‘You are trying to predict how your counterparty will act and what will be happening several moves ahead.’

Back in 1991, Buben – a maths and physics whizz who had taken first prize at various science Olympiads – was studying for a master’s degree in applied economics at the Moscow Institute of Physics and Technology. Realising that the dissolution of the Soviet Union would present new opportunities, he enrolled for evening classes at the newly formed American Institute of Business and Economics in Moscow. While continuing to study for his master’s during the day, he covered accounting, business and economics in the evening – which sparked his interest in a career in accounting and finance.

After graduating with his master’s in 1993, Buben did a brief stint as an audit assistant with Arthur Andersen in Moscow. While there, he was accepted for a master’s course in economics and finance at the University of Illinois. He benefited from a fellowship programme for graduates from former Soviet countries to study in the US, designed to assist in the transition of the ex-Soviet bloc countries from centrally planned to market economies.

The experience proved transformative for Buben: ‘It’s not only the classes you take and the knowledge and skills you gain, it’s the exposure you get to different cultures and people,’ he says. ‘You meet professors and students from all over the world.’
On his return to Russia, Buben embarked in earnest on a finance career. While in the US he had decided he wanted to work in commerce rather than audit as it seemed a ‘broader and more interesting’ sector.

In the 1990s a number of Western companies were moving into Russia. Interested in how they applied financial policies and procedures, Buben took a job as a planning analyst with Pepsi International Bottlers. A joint venture between PepsiCo and an investment company, Pepsi International Bottlers produced Pepsi for sale to the Russian market east of Moscow. A year later, he broadened his knowledge of international business when he moved to the Russian operation of US-based tobacco company RJ Reynolds.

It was at that point he began studying for the ACCA Qualification. ‘I realised I needed more specific accounting skills,’ he says. ‘ACCA was a good opportunity to get some knowledge of both accounting and accounting standards.’ He passed his exams in 2004 and gained membership of ACCA in 2006.

While the ACCA Qualification has proved helpful throughout Buben’s career, there have been certain periods when it assumed particular importance. One of these was during the early 2000s when he was a planning and budgeting manager for Lukoil Overseas Holding, a subsidiary of Russian oil giant Lukoil engaged in managing upstream projects in the Middle East, Central Asia, South America and West Africa. At the time, Lukoil Overseas Holding had set up around 50 different legal entities, so Buben was able to create accurate financial statements for the business based on his learning about consolidation techniques with ACCA.

He arrived at Lukoil from Zarya Confectionery, where he had been FD and had helped to turn around the loss-making business. Technically, the Lukoil position was a less senior role than the one he held at Zarya, but it had other attractions. ‘It was a different scale of company,’ Buben points out, ‘and a pretty interesting industry.’ He particularly liked the fact that in consolidating the reporting for Lukoil Overseas Holding, he got to work with other finance professionals in a number of different countries.

After Lukoil, Buben took a string of senior positions in the aviation, travel and construction industries. All the roles shared common themes – establishing financial policies and procedures, doing budgeting, and preparing financial reporting. They also presented some unique challenges. At Nicko Travel, for example, one challenge was to ensure that the business travel company had sufficient financing to support its rapid growth. At construction company RC Group, he faced a very different kind of challenge, with the business badly affected by the financial crisis that hit in 2008. Buben even studied for an insolvency qualification while he was RC’s group financial controller.

In 2009, he returned to the oil and gas industry as CFO of the Nigerian operations of Russian oil and gas giant Gazprom, which included two joint ventures with local businesses (see ‘The African Years’ box, below). He was responsible for establishing financial policies and procedures, and organising financial and management reporting. ‘I thought it would be fascinating to work for Russia’s largest company,’ he recalls. He also liked the idea of gaining international experience.

Buben adapted fairly easily to a new life in Nigeria, despite the obvious cultural contrasts with Russia. ‘You could arrange to meet someone at a specific time, on a specific day, and the person would actually come two days later,’ he says. ‘It’s a way of working that you have to get used to.’

After six years in Africa, he swapped Abuja’s tropical heat for the milder climate of Greece, embracing a new industry as CFO of SAM Shipping in the port of Piraeus. At the time, the oversupply of shipping services made for difficult market conditions. In February 2016, shipping rates plummeted to historic lows, causing the value of vessels to fall and hindering SAM’s ability to service its bank loans.

Buben’s first priority was to assist the company’s shareholders by restructuring the vital financing that was keeping SAM afloat. During this refinancing, the legal structure of the business changed because the banks wanted to finance specific vessels only.

‘SAM was converted into three mini groups based on bank financing,’ Buben explains. ‘A specific challenge was that the banks were requesting financial and management reporting about their vessels. So it was my responsibility to organise this communication with the banks. Since all this financial information needed to be audited, I was also working closely with the auditors.’

The shipping market recovered between 2017 and 2019, which was good news for SAM. But the outbreak of Covid-19 has inflicted another shock. Shipping rates have plunged again, taking the value of vessels with them. As a highly leveraged business, SAM has therefore again been wrestling with the challenge of how to repay its bank loans. ‘We are looking at different scenarios and discussing these with the shareholders,’ Buben says.

At present, it’s hard to predict exactly how the pandemic will impact shipping over the next 12 months. These are, after all, uncharted waters. ‘It depends on how Covid-19 influences the world economy,’ Buben says. ‘If the economy starts to grow again, then the potential for shipping grows too. But if there’s a second wave of the virus, it’s very difficult to say what will happen.’

He describes shipping as an ‘amazingly volatile’ business – but admits that’s what he likes about it. His plans for the foreseeable future are to remain in Greece, working in shipping, or move to a shipping-related business in another country. Both he and his wife like living in Greece, which he rates for its climate, nature, people and cultural treasures. ‘There are a lot of historical sights to enjoy,’ he says.

For nearly three decades, Buben has made a point of continually stretching himself and trying new things. This growth mindset has undoubtedly shaped his varied career. ‘Finance professionals are normally conservative,’ he says. ‘But being conservative is kind of boring. You should always consider some risk taking, although the risks should be adequately measured.’

2009
Shipping Asset Management (SAM) launched, based in Switzerland, to provide ship trading, operations and management to related and third-party ship-owners

19
Legal entities within the group

10
Vessels in the SAM fleet

‘Don’t be afraid of change – whether that’s moving to a different country or a different industry.’

‘Financial techniques can be applied to any situation. The first step is to study the situation and understand it. Then you can develop a plan for how to deal with it.’

‘Get ideas from different people, read books and attend lectures. Then, based on all the information you have acquired, develop your own way.’

When Evgeny Buben arrived in Abuja, Nigeria, in 2009, his task was to set up the finance function for all Gazprom’s operations in the country, including two joint ventures with local businesses.

Gazprom and state-run oil company the Nigerian National Petroleum Corporation had publicly committed to investing at least US$2.5bn in Nigaz, a 50/50 joint venture set up to build refineries, pipelines and gas power stations throughout Nigeria, although many of its plans were subsequently shelved following the death of President Yar’adua in 2010. The other joint venture, GeoData Technical Services, provided geophysical and geospatial solutions for the oil and gas industry.

Buben recruited his four-strong finance team from the local population. The team primarily dealt with local accounting, treasury and budgeting matters, and used external providers for tax and legal services.

He considers his greatest career achievement during his time in Nigeria to be a victory at the country’s tax appeal tribunal. Nigeria’s tax authorities had wanted to charge withholding tax and VAT on Gazprom’s use of foreign consultants for projects outside Nigeria. The ruling was ‘a good moment’, says Buben, who had put in two years’ effort to achieve its.

He looks back on his years in Nigeria with fondness. ‘I was impressed by Nigerians’ joie de vivre,’ he says. ‘In spite of all external difficulties, they were always positive.’