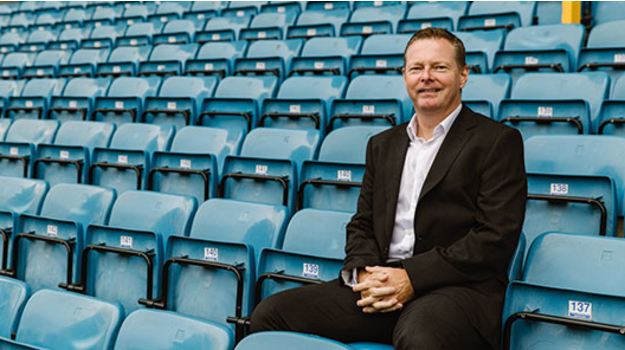 Steve Kavanagh joined Millwall Football Club as chief executive in November 2016. It was great timing. In his first season at the helm, the south London club won promotion via a League One play-off final. So the ACCA member got to hold aloft a trophy on the Wembley turf-, and now has to work out how the club can compete in the Championship – the second tier of English league football.

If you are ever tempted to moan about uncertainty in your business, try running a professional football club: income is largely dependent on fickle fortune on the field.

‘Football constantly changes, so you need fluidity and flexibility,’ says Kavanagh. ‘You can have your long-term vision, but you have to be ready to change your plans.’

To help him do that is the role of the board, membership of which includes a fan appointed in conjunction with the supporters’ club. Kavanagh says: ‘It provides a conduit for me and the board to the fan base and what they’re thinking. The board of a football club needs to understand its history. History shapes, but doesn’t determine, what we do.’

It’s results on the field that do the determining. Winning promotion via a Wembley final, is says Kavanagh, ‘the best’. Fans remember a great day out and ‘that emotion can carry the club forward’. However, it also presents challenges for the management, as all the other Championship clubs have known for several weeks what division they will be in during the coming season.

The Championship – the fourth most watched football league in Europe in terms of attendance, according to broadcaster Sky – is a substantial step up from League One. A few days after winning promotion, the board had agreed Millwall’s revised strategy. The most notable change for the promoted club is that central, core revenues increase from around £1m to £6.8m a season. TV rights and sponsorship deals are negotiated jointly by the Football League, with the spoils divided depending on the league and the status of the club. ‘The only way you can drive those revenues is by league performance,’ says Kavanagh. Nice on the way up, painful cuts on the way down.

The first target is to avoid relegation. The dreamland of winning promotion to the Premier League would see that £6.8m transformed into nearer £100m.

Clubs in the same league behave in starkly differing ways because of their history or ambition. Kavanagh points out that in the summer 2017 player transfer period, fellow Championship club Middlesbrough spent £15m on a single player, a sum just above Millwall’s total annual turnover. Kavanagh knows, though, that every club must balance the desire to compete with financial reality. ‘When you pull the finances of any club apart, it is not one business but multiple businesses that should not really co-exist. They have different KPIs,’ he says. The football element is a cost centre mostly spent on players’ wages. The revenue comes from broadcasters and sponsors, retail and hospitality.

‘We will set out budgeting for ticket sales depending on what we see as the fixture list for the season,’ he explains. But team performance and cup runs will impact that; win promotion and shirt sales will soar.

Uncertainty is not the only challenge – the business is heavily regulated. The Football Association and the Football League directly affect clubs’ behaviour, notably restricting the total players’ wage bill to a percentage of turnover. Clubs submit their budgets to the football regulators to ensure they are adhering to the rules over financial losses and investment.

Reputation can be as important as regulation. Unrelated to its league position, Millwall has forged a brand that out-punches its footballing success. And largely not for the right reasons. Kavanagh says the club ‘has a strong identity’. The fans’ chant of ‘No one likes us, we don’t care’ – notorious way beyond the football world – has become ironic, he suggests. ‘Inside Millwall there is family,’ he says. ‘The relationship with the fans is crucial, and we try to work on the positive values [of that identity] to build the club.’

For all the money and the glamour that the media and worldwide audiences bestow on professional football, clubs like Millwall remain defined by their geography – a poor part of London in Millwall’s case – and by a defiant, independent working-class culture. ‘When people get close to Millwall, they find something very different from their expectations,’ he says.

In football since 2002 Kavanagh knows the culture and the business of football well. Football is not a traditional P&L business; success is measured by performance on the field, and the stakeholders are the fan base and local community, as well as shareholders.

For Kavanagh leadership includes the crucial task of acquiring players, and negotiating the terms and conditions. He consults with others on recruitment and keeps the chairman and board briefed. He exudes calm and, frankly, toughness. The owner of Southend United called him one of the toughest negotiators he’d ever dealt with and subsequently offered him the CEO role at the club. Kavanagh prefers the word ‘pragmatic’. ‘We’ve had a few roll-arounds’, he remarks of one fellow football club CEO. But there is also, he says, camaraderie between MDs and FDs in football, swapping information on who is running ticketing systems or offering the best leasing deals. ‘We’re all in the same boat.’

That MD boat includes dealing with the owner, American businessman John Berylson, who has been chairman for over 10 years. Kavanagh praises Berylson’s stewardship of the club, saying that he is ‘excellent to work with’.

Kavanagh describes working life as a ‘rollercoaster’, with days often hijacked by the unexpected. ‘It seems every day something crops up. For instance, some Millwall fans were caught up in the London Bridge terror attacks [in June 2017], so the manager and I visited one in hospital with serious injuries. We took up the League One play-off trophy: it comes back to community engagement.’

Kavanagh says he does not have a template for running a club, but adds: ‘I know the areas that have to be run in certain ways.’ He puts emphasis on good communications within the club, with fans and the wider world. ‘For me, at Millwall, the PR and communications weren’t where they should have been. Our history dictates it is critical that our point is put across.’

It should come as no surprise that financial professionals occupy senior positions in football. Kavanagh says: ‘The skills that accountancy gives you translate well into driving a football club. Having a financial background helps and then it moves on into broader strategies.’

Of his qualification, he says: ‘ACCA has given me a backbone that enables me to run a business and talk to people with gravitas, confidence and belief. They listen to you because of that professional qualification.’

Looking back on his training and professional life, he says: ‘You were working with business leaders of fast-growing businesses, which had to respond to the changing environment and set a long-term plan but be ready to adapt that plan.’ And that, as he notes, describes exactly what his role is in running Millwall Football Club.

'Leadership in sport is high profile. Part of the answer is to have a good team, as is making decisions quickly.'

'As CEO my job is to make decisions that aren’t universally liked. The worst thing you can do is ponder. Listen to those around you, make the decision quickly, and stick with it. If you’ve got it wrong, adapt. But doing nothing is far worse than doing something.'

'Leadership is working with people and giving them the freedom to achieve and deliver the best they can do.'

'In any negotiation, it has to be a win-win.'