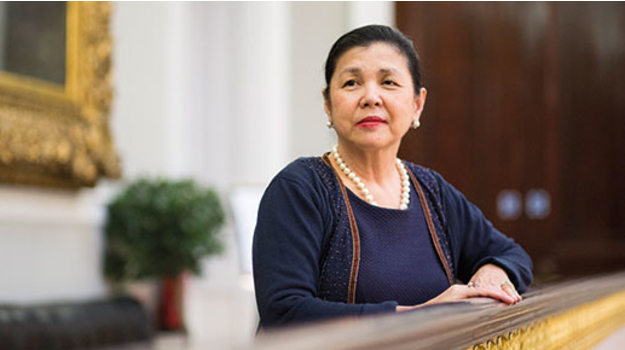 How do you introduce Mei Sim Lai OBE? One approach, popular among Chinese people in London, is to highlight her status as a representative of HM Queen Elizabeth II. This stems from her appointment as the representative deputy lieutenant for the London Borough of Brent in 2007. ‘It’s a great honour,’ Lai says. ‘I am supposed to be the eyes and ears of the Queen in the borough,’ she explains. ‘I represent her at ceremonies and civic functions.’ Lai presents awards, visits charities and temples, attends church services and is involved in all royal visits to Brent, including a recent one by Prince William, the Duke of Cambridge.

Lai seems amused by her royal connection. She has come a long way since her father bought her a one-way ticket from Malaysia to the UK in 1970. One of 10 children, she knew she had to support herself and decided after leaving school in Kuala Lumpur to train as a chartered accountant in London. ‘This is one way that accountancy students from overseas can get a professional qualification and earn at the same time,’ she says.

Having joined medium-sized firm Pridie Brewster as an articled clerk, Lai gained the ACA and ACCA qualifications, having been encouraged by one of the firm’s partners. ‘ACCA is so big globally, it’s useful to be a member,’ she says. ‘It has a strong global brand.’

Lai became Pridie Brewster’s first female and Chinese partner in 1979, providing audits and financial, tax and business advice to UK and international clients. She stayed with the firm until 2007 when she set up her own boutique practice, LaiPeters & Co, based in the City of London. ‘I do a lot with charities and the not-for-profit area, as well as owner-managed businesses and SMEs,’ she says. ‘Some clients I have looked after for over 30 years. Some followed me [from Pridie Brewster] so I didn’t have to put a lot of effort into marketing to get new business.’

She has deliberately kept the firm small, employing on average three qualified accountants, in order to have time for her other interests and roles, including charitable and public appointments. Her wide-ranging activities began developing back in 1983, when she joined the City Women Network with a view to meeting her partnership responsibilities for bringing in new clients. She became the network’s treasurer and then its chairman in 1988.

‘In rising to the challenge of being chairman, I had to make speeches,’ Lai says. ‘I was interviewed in the media. I had to represent the organisation at various events. I had to forget about my shyness and talk to members. The personal development was fantastic and that opened doors to so many other things. It led me to the world of public appointments and other groups.’

Lai has subsequently been involved in numerous organisations, panels and committees linked to women’s organisations, universities, diversity and race relations initiatives, as well as the health and civil services – too many to name. One important role she retains is honorary secretary of the Institute of Directors’ City of London branch. For 25 years Lai has been organising branch events and influencing its direction and activities, including helping to set up a China interest group. She’s still actively involved in many other charitable and not-for-profit organisations, many with a focus on women, the Chinese community and international relations.

One organisation she feels passionately about is Mulan Foundation Network, a registered charity that recognises the achievements of successful Chinese women globally through annual awards. The 2016 awards were announced in December – winners’ names were still top secret at the time of Lai’s interview – but 2015 award winners included Sein Chew (Outstanding Contribution at the International Level), founder of Unity Asset Management of Hong Kong and New York and the first ever Chinese president of the International Women’s Forum, a global organisation of more than 6,000 women leaders.

Mulan Foundation Network’s roots stretch back to the politically affiliated Chinese for Labour group, which initiated the first Mulan Awards in 2009, although these were focused primarily on the achievements of Chinese women working in UK community centres. When the decision was taken to create an independent charity in 2012, Lai agreed to become its chairman with a mission to give the awards global reach.

The charity is still in its early stages. ‘At the moment we have to rely on volunteers,’ Lai says, although she would like to be able to employ staff at some point. ‘Otherwise you can’t do much, particularly these days with social media and the need to keep that up to date. But we don’t want to spend all the money we raise on administration, so we have volunteers who help us with the awards. We want to take the charity to the next level, but we are not rushing. We are steadily making useful contacts and building on those.’

Lai recognises that the world has changed hugely since she began her career in 1970. ‘We have moved on and a lot of young women now think they are equal; there’s no issue about it,’ she says. ‘But despite 30-odd years of legislation on equal opportunities and equal pay, women are still behind in pay and getting to the top. There’s a debate on whether there should be quotas to get more women into top boardrooms. The thinking of a lot of very successful women is that you do need some kind of positive action because the forecast is that it will take up to 80 years to achieve gender parity – and that is not good enough.’

However, it’s also up to women to drive change, Lai believes. ‘Women have got to be courageous and put themselves forward for top jobs, even though they might not succeed the first time,’ she says. ‘They have to stick their heads above the parapet. Unless they apply, they are not going to stand a chance of getting shortlisted. Women should do more because you can’t wait for the men to decide they are going to appoint you.’

This is where organisations like Mulan Foundation Network can help – by enabling a ‘smarter way of raising your profile, promoting your brand’, Lai says. ‘It’s a smarter way of networking – more strategic.’

Lai was awarded an OBE for services to equal opportunities in 2004. Why has she given so much time over so many years to voluntary and public activities? ‘I enjoy meeting people,’ she says. ‘I like helping people and connecting people. I like ideas and finding out what other people are doing. My reward is mostly non-monetary, but I have a busy and interesting life.’

‘Chinese women – anyone – can do the same [as me] if they rise to the challenges, if they take an interest and don’t dismiss opportunities – because it’s easy to say “I am too busy”, “I can’t do this” or “I don’t know much about it”. You have a go. That’s my message.’

‘When asked to do something, I always said “No problem”. You need a positive attitude.’

‘We need more Chinese women to play a bigger part in the community – to give back and help charities. It is not all about making lots of money or having a long list of qualifications. A lot of employers now look at what else you have been doing to develop your skills to give back to the community, to help others. You do those other things and they indirectly open doors for you. They develop your transferable skills.’

Mulan Foundation Network of which Mei Sim Lai is chairman, is an independent UK charity registered in 2012 and formally launched at the House of Lords in October 2013.

The charity is named after the Chinese legendary heroine Hua Mulan, who masqueraded as a man to save her family honour and her country.

Its trustees include, among other eminent individuals, Sonny Leong, chair of Chinese for Labour; Katy Blair, co-founder of the Islington Chinese Association; MeeLing Ng, former Labour councillor; and Theresa Booth, director of the Chopsticks Club and a legal environmental consultant for China.

This article was first published in the January 2017 China edition of Accounting and Business magazine.