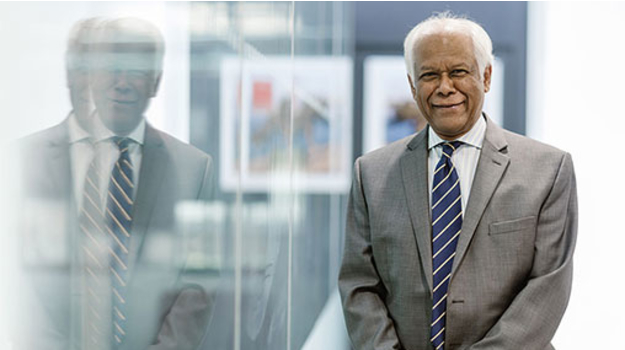 For Fayez Choudhury, the accountancy profession is a cornerstone of a properly functioning society. And he should know. During a 42-year career he worked at PwC and held senior positions at the World Bank and a number of high-level representative bodies before joining the profession’s global organisation, the International Federation of Accountants (IFAC), in 2013 as its CEO – a position he is stepping down from at the end of this year.

Although IFAC represents associations across the globe with a combined total of three million members and students, it is itself a relatively small organisation. Against that background, Choudhury encouraged the IFAC team to ask themselves what IFAC can do that others can’t – IFAC’s comparative advantage.

Choudhury has been keen to explore how to leverage IFAC’s extensive network of member bodies to facilitate dialogue. ‘By not being attached to any one jurisdiction, IFAC – which is ultimately a knowledge, advocacy and stakeholder organisation – can become a trusted intermediary for stakeholders in their dialogue with the profession,’ he says.

Members of a foundational profession for society such as IFAC have an obligation to help emerging economies, Choudhury suggests, including developing a profession in those countries. ‘We are not just accountants turning up to an office every day; we are important members of civil society because we are a privileged elite, having benefited from a good education and training. We are also influencers in the organisations in which we work.’

This, he says, gives accountants an obligation to speak out on issues where the role gives insight. While admitting that there is always more to do, Choudhury says he is proud of the way IFAC has spoken out over the years (see box on the top right).

‘Projecting public interest issues on a broad stage using the weight and credibility of the profession, and partnering with other influential bodies, has led to significant successes,’ he says. ‘It is not just us speaking about the issues; we are catalysing influential voices to participate in these discussions.’

As the world continues to change at speed, Choudhury says he is optimistic that IFAC possesses the agility, flexibility, nimbleness and durability needed to spot and take advantage of the winds of change and adapt. ‘We do have a responsive organisational mindset,’ he says.

He pays particular tribute to the ‘knowledge mediation of the IFAC team’. IFAC’s 175 member bodies around the world are generating information and knowledge relevant to the profession. Leveraging this, IFAC has constructed a Global Knowledge Gateway – an online hub organised by topic area that provides links to further resources. ‘People can have at their fingertips a wealth of accounting knowledge from around the world,’ he says. ‘For IFAC to be that knowledge intermediator and convenor is a fundamental role.’

But he believes that IFAC must go further still. ‘Having great ideas and topics in our New York offices or at board meetings isn’t enough,’ he says. ‘We need to deliver those messages. In a world of information overload, our messages have to reach the right people and they have to take notice.’ As a result, IFAC has upgraded its global communication function.

Choudhury sees ‘difficult and fundamental challenges coming down the pipe’, and believes the profession needs to track fundamental change, which is coming from many directions. While he does see opportunities, he says they are ‘often fleeting chances to promote the role of professional and public interest issues, often in a small window of opportunity’.

The first challenge Choudhury names is an old one: ‘Every profession has to constantly search for relevance. Who are we trying to serve and how do we best deliver?’ He describes the relevance issue as subject to considerable flux.

Although the same is true for a great many professions and jobs, much of the work that was performed 40 years ago by accountants is now automated. He wants accountants to be at the heart of the societal discussion on the future of work. ‘Professional accountants won’t be doing the work we do today, but we have to scrutinise our offering and make sure it is aligned with the market’s needs,’ he says.

The other key challenge for the profession is the perceived changing view of careers of the generation currently entering the workforce – the millennials and Generation Z. ‘Technology is changing people’s views of the physical workspace, job security, opportunities, entrepreneurship and horizons in a way that was unimaginable even 15 to 20 years ago,’ he says.

The profession has to work out the impact of those changing perceptions on the need for a steady stream of the brightest to join its ranks. It also has to compete to remain attractive compared with other professions.

Roles such as performance management and reporting are being opened up to those with expertise in emerging knowledge sectors such as data mining. Such changes benefit society, says Choudhury, but challenge the accountancy profession to define its value proposition. ‘We need to skill accountants up for the new challenge.’

On the subject of the future of audit, Choudhury says the profession carries out the important audit function of expressing an opinion on financial statements ‘by and large very well’. A watershed moment was the redrawing of the audit report to include key audit matters (KAMs) to show where auditors spent their time and the issues organisations were facing. ‘It gives insight into the financial risk and dynamics that users of accounts would not otherwise have.’ However, he acknowledges that increasingly the financial statements do not provide the information required by stakeholders.

Clearly the challenges faced by the profession differ across the world: the agenda for accountants in developed countries is not identical to those who are working in fragile states. ‘We have to look at that transition and provide a roadmap that different countries can use,’ says Choudhury.

But perhaps one challenge is common to finance professionals the world over. Choudhury calls ethics ‘the defining characteristic of the accountant’, adding: ‘If professionals are not grounded in ethical principles, then the profession is not serving its purpose.’

Ethics drive the whole profession, but Choudhury sees auditors as facing a particular threat of being subject to pressures related to the independence and objectivity they are obliged to bring to their work. The International Ethics Standards Board for Accountants’ code of ethics, which is supported by IFAC, dwells on that threat, but Choudhury points to ‘a considerable infrastructure from regulators and government to make sure conflicts of interest are avoided and safeguards exist against threats’.

While Choudhury describes a substantial and meaningful ethical framework, he acknowledges it will not always work. ‘Even the most highly skilled surgeon will have the occasional lapse,’ he says. ‘The one ethical breach – out of hundreds of thousands of good-quality work – is the one that makes the press. That transparency is good, and the profession is committed to that continuous learning.’ And he argues that ethics are changing for the better. ‘By our shining a light, people have a more nuanced and deeper view of where conflicts can occur or principles may be compromised.’

Choudhury says that as CEO of IFAC he has been energised by the people he has met from around the world. They have helped to enthuse and motivate him to make a contribution to the development of the profession. ‘I am fortunate to have had this opportunity, and IFAC will remain an organisation for which I have respect and affection,’ he says.

Choudhury cites examples of IFAC speaking out on a range of public interest issues.

Smart regulation ‘We all agree regulation is needed. The challenge is to get it right and fit for purpose rather than overregulate.’ IFAC has consistently picked up the theme of how overregulation is hurting business as well as the profession.

Public sector accountability IFAC is raising the issue of how the sector is underserved by high-quality financial reporting.

The role of SMEs SMEs create 90% of jobs and GDP, and IFAC promotes how the accountancy profession has particular insight into this sector through SMPs.

Corruption IFAC will be at the G20 summit in Buenos Aires in late November/early December 2018 as a network partner, highlighting the risk posed by fraud and corruption.

7 October 1977
Date that IFAC was founded – in Munich, Germany, at the 11th World Congress of Accountants.

175
Number of IFAC member-bodies and associates, drawn from 130 countries and jurisdictions, and representing nearly three million accountants. Governance of IFAC is controlled by its council, which comprises one representative from each member body, and the board, which is responsible for setting policy and overseeing operations.

New York
Headquarters of IFAC, which is registered in Geneva.

This article was first published in the September 2018 UK edition of Accounting and Business magazine.