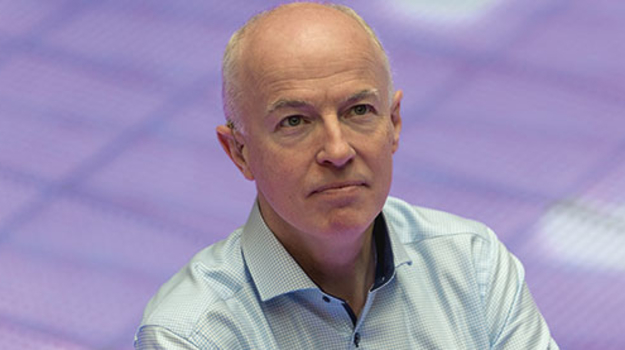 Dublin’s economic reboot has come with a fresh surge in office construction, and while some may cast doubt on the sustainability of the current crane count over the city’s skyline, few have any criticism to make of the quality of the buildings themselves.

So high has the benchmark been set that it takes something truly special for a new building in Dublin to capture headlines and public interest now. And that’s just what One Microsoft Place, Microsoft’s new EMEA Operations HQ, which opened in early 2018, has done. Themed around the concept of an island, the €134m campus in Leopardstown features a harbour-themed entrance area and a mountain area with a digital lake and waterfall created by blue LED floor lighting.

Sitting on the cusp of a new wave of Irish architecture, Microsoft’s EMEA Operations HQ also represents the latest chapter in the long relationship between Ireland and one of the world’s most formidable tech companies. Indeed, the investment in the building strongly suggests the company sees the most exciting part of this 34-year relationship as lying ahead.

‘One Microsoft Place has been designed to represent the way we now work and our culture transformation,’ Dermot Igoe FCCA, FD of Microsoft EMEA Operations, says. ‘It’s about giving physical manifestation to the new One Microsoft culture, which pivots fundamentally around a growth mindset. This means creating a diverse and inclusive environment where people can grow and develop, where we can attract and maintain the best talent, and where everything we do is driven by our passion to deliver value to our customers.’

Home to 2,000 staff and 72 nationalities, the HQ comfortably ticks the wish list boxes of the most demanding of modern employees, with 165 meeting and focus rooms, five restaurants, a bakery, gym, yoga studio and wellbeing centre. A dedicated education space – the Dreamspace –provides visiting primary and second-level pupils with the opportunity to learn digital skills and interact with the new developments in science and technology that are playing a part in shaping their future.

Among the HQ’s many innovations, the decision to have no individual offices is particularly emblematic of change. The building is divided into ‘neighbourhoods’, each occupied by an operational division such as finance, sales and marketing, engineering and operations. Hot desking is the norm at every level of the organisation. It’s an approach, Igoe admits, that ‘was very different from what I had previously been used to. However, it’s been a really positive experience for everyone. In my case, it has enabled me to feel much more connected with my team on a social and human level, and overall it’s driving a more collaborative and agile way of doing business.’

One Microsoft Place is the third building Microsoft, an ACCA-accredited employer, has occupied in Dublin since 1985. In the unforgiving world of technology, it’s easy to forget that the company’s position at the forefront of global computing over four decades is a remarkable story in its own right. The beginning of this most recent renaissance is widely seen as heralded by the arrival of Satya Nadella as CEO in 2014. Microsoft’s new mission statement is now: ‘to empower every person and every organisation on the planet to achieve more’.

‘While Microsoft had a strong track record of growth, there was a feeling that the time had come to redefine what our sense of purpose was,’ Igoe says of this period. ‘The new mission statement captured our belief that, if we can help people and organisations to achieve more in their personal and work life, then we are fulfilling our purpose as an organisation. It’s about our determination to provide the best-in-class platforms and productivity services for developers and customers.’

Embracing the cloud and AI

The new mission statement also reflects some major shifts in the industry that Microsoft has been well positioned to capitalise on. ‘The most significant of these trends are undoubtedly the cloud and artificial intelligence,’ Igoe says. ‘Key to our new sense of purpose has been to look at how we can develop both to enable value for our customers. That has really played to a sweet spot for Microsoft. It’s also brought about a realisation among the wider public that a lot of what the company is doing now is really cool.’

With recent PwC analysis suggesting that up to 14% of global GDP will be affected by artificial intelligence (AI) in the coming decade, Igoe says Microsoft is clear about the opportunity it is going after. As a member of the ACCA Irelandtechnology committee, he is also keen to stress the relevance of these developments to accounting. ‘It’s a critical time for our profession. Technology is disrupting how business is being conducted and creating a very significant opportunity for accountants. To capitalise on that, we have to understand how to go after it.’

He believes that data analytics and AI will be particular drivers of change. ‘In the past, the finance profession proved itself by being the master of looking backwards. Now, new technology not only allows us to understand what has happened better and why but, increasingly, using machine learning can help to predict what will happen. Also, the combination of machine learning and robotic process automation – bots – can provide decision support and even decision automation answering the question what do we do about it? So we, as finance professionals, have the opportunity to be the masters of the data that provides this insight to our clients.’

The cloud will also have an important part to play in this. ‘It plays its role by providing us with the one version of the truth. You can then apply the advanced data analysis and AI to do some very exciting things with that information that will help the business going forward.’

Igoe completed his ACCA studies in the early 1990s while working in London, and honed his skills in organisations such as Bechtel, McDonnell Douglas (which later merged with Boeing) and Chesterfield International Financial Services. ‘I’ve always felt ACCA has been a critically important part of my professional career. It has enabled me to do so much, by virtue of what the professional body represents. Its sense of purpose, values and credibility in the business market have allowed me to pursue my career opportunities.’

On returning to Ireland, he joined Microsoft as chief of staff for European Operations in 1995, taking on responsibility for areas such as business management, project management in EMEA Operations. ‘It tested my skills in areas I hadn’t been involved in before. In fact, I decided to stay in operations for another couple of years to ensure I fully understood how everything operationally in the company worked,’ he recalls. In 2001, he took the opportunity to focus more purely on finance with the role of financial controller, EMEA Operations. His most recent appointment as senior finance director caps what is now 24 years with the organisation.

While there may be a lot to take pride in, Igoe is clear that, as with Microsoft itself, it is the future that he is focused on. ‘It’s by virtue of what we do and what we deliver in value to our customers, in terms of products and services, that we measure ourselves. The finance function’s priority will be to continue to enable that. We will support the interests of our business partners and their future market opportunities, maintaining fiscal responsibility and controlling vital functions such as budgeting and compliance . We will embrace the new technology that’s being developed around us in our own operations as we do so.’

Ireland’s place in this story will also remain significant, he believes. ‘There continues to be something unique about Ireland and its offering. With the concentration of tech and world-class companies in general, there is something very special about the vibrant network this creates here. I would say that ACCA Ireland very much contributes to that in terms of the connectivity of finance leaders that it promotes through its networks. We see our success and the success of our peer companies as making Ireland a place where people want to live and work in, and a place that companies like Microsoft will continue to invest in.’

This article was first published in the June 2019 Ireland edition of Accounting and Business magazine.