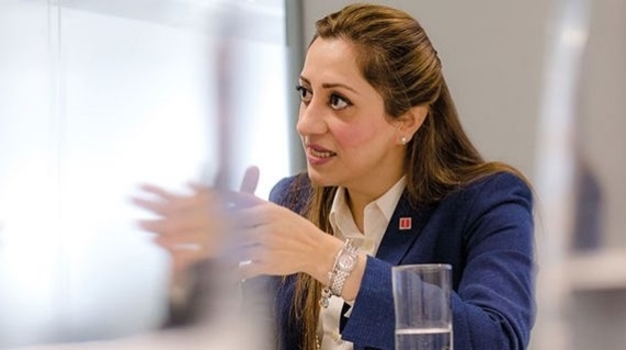 ACCA Council member Ayla Majid FCCA, MD at Khalid Majid Rehman Chartered Accountants (KMR), is a trailblazer for women in business in Pakistan. Not afraid of new challenges, she is becoming used to being the sole woman at the decision-making table, but hopes others will follow.

At KMR, Majid specialises in project advisory, mergers and acquisitions, public–private partnerships and public policy in areas such as infrastructure (including roads and bridges), minerals, energy and communications. ‘I advise from one end to the other - from evaluation of bids to carrying out negotiations on the concession agreements and all the way to the financial close - working with all the stakeholders,’ she says.

Her breadth of qualifications and experience is valuable here. As well as her ACCA Qualification, Majid also has an MBA from the Lahore University of Management Sciences and a law degree from the University of London, gained through distance learning. ‘The tripod I have - business, accounting and law - really helps in doing the 360 and closing the loop,’ she says.

In an early public policy assignment in 2006, Majid helped the Ministry of Petroleum and Natural Resources revamp Pakistan’s national mineral policy. More recently, she participated in a major project on resource assessment for shale gas in Pakistan. ‘My role was to do the capital investment profiling and assess the regulatory and fiscal framework,’ she says. ‘I had to analyse the existing regulations and framework, and study the infrastructure available, and then present to the government the framework to move towards in the formation of policy.’

Majid found herself rapidly becoming a rare expert in shale gas policy formulation and operations, a new field in Pakistan. ‘I had to study extraction technologies and interview almost all the significant players in the market,’ she says. ‘I watched a lot of YouTube videos. I soon found myself giving “shale gas 101” lessons to lawyers.’

Majid started her career in business, with no immediate plans to enter the accountancy profession. Having graduated with her MBA, in 2000 she joined Fauji Foundation, a charitable trust founded in 1954 for the welfare of ex-servicemen and their dependants and one of the largest business conglomerates in Pakistan. Her role involved restructuring a portfolio of commercial companies from across a range of sectors, including power, cement, sugar, technology and oil and gas. ‘I was working on fixing lots of different projects and I would interact frequently with lawyers, accountants and bankers – International Finance Corporation and the like,’ she says. The experience triggered her decision to gain additional qualifications. ‘I figured I needed to improve my understanding of accounting and of how contracts are made,’ she says. She did so by completing a law degree in 2008, just two years after gaining her ACCA Qualification.

‘ACCA was the natural choice,’ Majid says. ‘It had the best-quality curriculum and was relevant to what I was doing. It also had the right kind of flexibility; I was working so couldn’t do full-time study.’ During this period Majid decided to join KMR, the accountancy firm her father had founded in 1975, as a director in its business advisory service. ‘I had completed the bulk of the restructuring task at Fauji Foundation so there wasn’t much left for me to do there,’ she says. At the same time, she realised that her multisector experience would be valuable to KMR.

Majid is also chief executive of CAMCO, a brokerage and investment advisory company that she set up in 2006. ‘That’s my platform for working in the capital markets,’ she says. ‘My work has been particularly in the policymaking, governance and regulatory area.’ Such experience has helped to make her a trailblazer for professional women in Pakistan to the extent that in 2010 she was elected to be a member of the board of the Islamabad Stock Exchange. She later worked on demutualisation of the exchange and most recently she was part of the team that restructured the capital markets, resulting in the merger of three stock exchanges, which led to the creation of the Pakistan Stock Exchange.

‘It was like breaking the glass ceiling,’ Majid says. ‘At the beginning there was a bit of resistance or lack of acceptance from male colleagues because it was new. I was one woman among nine men. But I really enjoyed it; I learnt from working with them. I realised that as women, we have a slightly different way of thinking and it is extremely important that we work together and contribute to each other.’

She believes that her presence modulated the atmosphere for the better. ‘When I walked in I got a tremendous amount of respect and the environment would change,’ she says. ‘Men would straighten up and talk in a slightly more mellow fashion.’ But she also found she sometimes had to challenge their views.

‘I had to take a strong position on certain areas, such as the need to carry out business in the most ethical manner,’ she explains. ‘I had to face some strong challenges also. I found these situations to be tough but I thrive on challenges. When I joined the board in 2010 I was able to change the opinion of the entire board to agree with my perspective on a number of areas where all the nine men initially had a contrary, very strong position. I did it by communication and persuasion, being professional, not being intimidated and not giving up.’

Majid is also one woman among men in her role as an independent director of the Islamabad Electric Supply Company, having been nominated by the Ministry of Water and Power. ‘I also chair the audit committee,’ Majid says. ‘I really enjoy working there; it’s exciting and challenging.’ She would be happy to see more women join her on such boards. ‘I feel the work I am doing is opening doors for other women,’ she says.

‘When I take on these positions, I feel I have some responsibility to represent my gender so that men know there are smart women out there who can do the role as effectively as anyone else.’

ACCA activities also feature in Majid’s diary. She was on the Members’ Network Panel in Pakistan before joining Council in 2014. She is a strong ACCA advocate. ‘ACCA is a great door-opener for women all over the world,’ she says. ‘Women in developing countries don’t always have access to education, so they need flexibility. Not all women can have full-time jobs; there could be cultural restrictions or family commitments. ACCA is a qualification they can pursue from the comfort of their own homes. They can work flexibly and have access to networks all over the world. So having the ACCA Qualification is extremely important.’

ACCA offers more than an accountancy qualification, Majid adds. ‘We don’t only work as accountants. My role is sometimes about strategy. When I am sitting on boards it is about governance. In my own company I work as an entrepreneur. When I am working on delivering assignments, it’s about working as a professional.’

Majid gives substantial credit to ACCA for her success. ‘We are all a product of our experiences,’ she says. ‘Because of ACCA I have met amazing people and had amazing experiences.’

Her belief in the value of sound qualifications is reflected in her membership of the board of governors of the Helpcare Society, a not-for-profit organisation set up by a retired army general to run schools for underprivileged children. ‘It’s about providing quality education and putting them on the path to completing professional qualifications so they can come out of the loop of their underprivileged status,’ Majid says. ‘They can become independent and help their families. Having a qualification like ACCA’s is extremely important for economic empowerment. That’s true for women, for people in refugee camps and for people who are underprivileged.’ Helpcare’s first students have now graduated from university, with some aiming for a career in the civil service and accountancy.

While still aiming for a top leadership role, Majid wants to ‘give back’. This she is also doing through her role as one of the World Economic Forum’s Young Global Leaders, teaming up with other talented individuals from around the world and all disciplines. ‘I was very humbled to be nominated,’ Majid says. ‘I get to interact with a phenomenal group of high achievers from all over the world – from business, professions, politics, music, art, the social sector. The idea when we get together is to have a positive impact for the global good.’ Majid, for example, is involved in initiatives aiming to provide electricity to isolated villages and give support to refugees.

Majid is also a great believer in continuous learning and development. In the spring of 2016 she spent two weeks at Harvard University in the US, completing a module on global leadership and public policy. How does she find the time for so many activities? She quotes a saying of a former boss at Fauji Foundation which made a big impression: ‘When there is a night in between, you are never short of time.’

2008
Gained law degree from the University of London