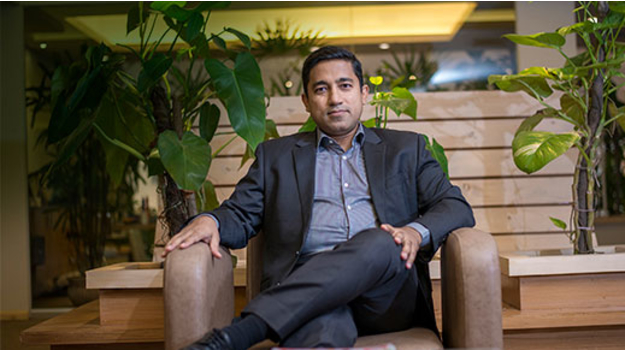 Ending up an entrepreneur was perhaps Plan B for Arif Islam FCCA, managing director and CEO of fibre-optics business Summit Communications, but the financial professional has more than proved his business smarts over the years. ‘We built the company from scratch, and it has become the primary telecom and ICT infrastructure in Bangladesh,’ he says. Underlining just how far the business has come, he explains that over the past eight years Summit Communications has connected all of Bangladesh’s 64 districts with a fibre network spanning more than 42,000km.

In fact, the company that he jointly founded in 2010 with diversified Bangladeshi conglomerate Summit Group currently provides fibre-based infrastructure services to more than 4,600 mobile base stations. It also provides 5,000 connections for internet service providers and 3,800 for government offices. Last year, the company also helped launch a nationwide 4G service enabling mobile operators to scale up their networks, and secured a government contract for the strategic Info-Sarker project to connect and digitise public services and offices across the country.

He has turned Summit Communications into the country’s largest fibre network business in less than a decade through his own business prowess and dedication, along with the support of Summit Group. The achievement is all the more extraordinary considering that entrepreneurial spirit was not especially in evidence in his family background – his father was an income tax lawyer. Islam junior also set up a real estate development company, Autumn Homes, in 2010, so business is clearly in his blood.

In his previous role as deputy CEO of Bangladesh’s largest mobile telecom operator Grameenphone (a publicly listed company in which Norway’s Telenor Group holds a majority stake), he was ‘intrigued’ by the business decisions made. It was his involvement in leading strategic and business planning at Grameenphone for many years that allowed him to hone his business acumen, he says.

During his 10 years at Grameenphone, he drew on approaches to financial and business leadership he had learned during his ACCA training. ‘All the discussions, seminars and dialogues on the ACCA course were business-oriented,’ he says. ‘It helped me mentally prepare myself for the business world.’

The company he now leads, and in which he has a personal 5% stake, is majority- owned by Summit Group. The group’s founder and chairman, Muhammed Aziz Khan, ranks 34th in the list of the 50 richest people in Singapore and is a legendary entrepreneur in Bangladesh.

As for Islam, he grew up in Bangladesh’s capital Dhaka and still lives in the city. Wearing a charcoal-coloured suit and pinstriped shirt, he looks top-to-toe confident for his AB interview in his office at the Summit Centre complex in Dhaka’s commercial heartland Karwan Bazar. ‘Our ambition is to be the operator of choice in Bangladesh,’ he declares.

He is proud that his company’s fibre network has given the country access to high-capacity transmission and internet services, helping users to generate data as well as surf YouTube, download high-definition videos, and play games.

And he is pleased with Summit Communications’ commercial success, although he admits that maintaining cost-efficient operations is challenging, and that generating revenue growth while prices constantly fall is the biggest challenge of all. To keep income flowing, the company has to adapt its technology to serve new communications devices that hit the market. ‘I need to be ahead of the game,’ he observes.

There are other challenges too in Bangladesh. Frequent floods and rapid infrastructure development work may catch fibre network companies unaware if they are not careful. Heavy rains and extensive roadworks can mean cables have to be repaired or replaced, which adds costs and brings operational challenges. As a result, Summit is increasingly moving its overhead lines underground. Another problem is that Bangladesh’s power supply remains unreliable, with outages a particular concern. ‘I need to make sure that my network’s operation is seamless,’ he says.

Clearly, though, given Summit Communications’ remarkable growth, the company is largely managing to overcome these problems. Islam would like to see the business expand still further in the near to medium term. With his country’s cities, towns and suburbs now all covered, he has developed a plan to extend the company’s fibre services to rural areas as well. He would also like to see further take-up of Summit Communications’ fibre network by ISPs, mobile operators and government offices.

In August last year, the company secured a licence to operate telecom towers in Bangladesh, which it will run through either a new subsidiary company or a joint venture. Islam believes that the combination of fibre and tower technologies will be a cost-efficient approach.

The company’s strategy and strengths are benefiting from exposure to international companies. Summit Communications works with global vendors, such as US-based Juniper and Cisco for its active network equipment, China’s Huawei for its network backbone, and China’s Yangtze Optical Fibre and Cable for its optical fibre cable. To serve a company with a 1,300-strong workforce, a finance team of 31 in-house accountants and eight audit staff has been assembled under CFO Mohammad Forhad Hossain.

In a country where corruption and financial crime are endemic, Islam insists that Summit Communications upholds good corporate practice and business ethics. These commitments are inspired by the company’s parent, he says, which has business relations with the World Bank’s International Finance Corporation (IFC) and US multinational General Electric (GE). ‘Our vendors sign contracts agreeing they won’t resort to any unethical practices,’ he explains, adding that punitive action is taken against employees who breach the company’s ethical standards. Routine compliance-related campaigns are organised to educate employees.

Islam believes that IFRS Standards have helped the company operate such policies. Bangladesh is largely IFRS-compliant and is introducing updates as they are released. ‘This helps provide a good reference point to follow, and routine audits are also carried out based on these to ensure compliance,’ he says.

As CEO, Islam seeks to guide his senior management team, but is keenly aware of the pitfalls of becoming too involved in the operational side. He makes sure to reserve sufficient time for strategic thinking. ‘My goal is to concentrate on business development and strategic transformation,’ he says.

His style is to empower his employees, he says, delegating to those who understand his language. ‘I am an involved leader and like to work with the team. I try to walk the talk and set the standards for my team myself. I have been a perfectionist all my life.

‘I hope to guide other people to excel in their particular competence areas. So I try to evaluate their psychology and learn their strengths so that I can do my best to match their roles to their personal strengths. I want to be a CEO who inspires the team to get to the next level of their potential.’

‘There are huge opportunities for accounting and finance professionals in Bangladesh. As an emerging market moving from a largely agriculture-based economy to one with significant industrial and service muscle, it has seen annual GDP growth of between 6% and 7% consistently for the last 10 years. There is a growing demand for expatriate professionals in the infrastructure sector, such as power, road and bridge construction, and telecoms.’

‘To succeed in Bangladesh, finance professionals need diverse skillsets, with knowledge of accounting, corporate finance, treasury and taxation. Also, as this is an emerging market, subject to fast expansion and change, professionals need competence in interpersonal communication and analytical skills, as well as problem-solving, decision-making and leadership abilities.’

Summit Group
Majority owner of Summit Communications and one of Bangladesh’s largest conglomerates, with interests in trading, energy and power, shipping, hospitality and real estate as well as communications

This article was first published in the January 2019 International edition of Accounting and Business magazine.