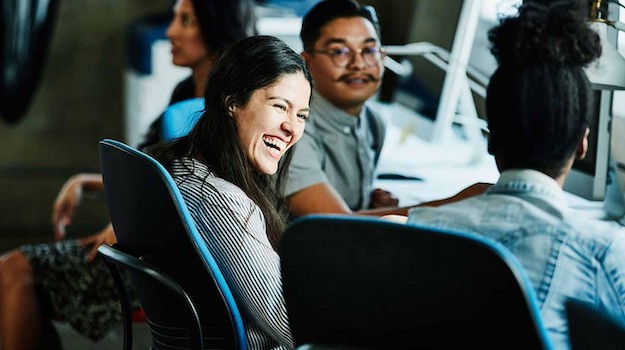 Most people expect objective success to lead to subjective success – achieving greater income and status will make them happy. However, a growing body of evidence suggests that the direction of causality is actually the reverse of this: happiness is a bigger factor in determining objective career success than the other way around.

You have no doubt heard of the idea that fear and other negative emotions can put people into the so-called fight-or-flight mode. What is less commonly known is that positive emotions such as joy and contentment put people into a broaden-and-build mode, in which they seek to broaden their skills and build new relationships.

In other words, being happy at work makes people more likely to seek out novel challenges and interact with others. This in turn likely contributes to the results they get and therefore their greater objective success in terms of pay and promotions.

Consider a famous series of studies written up in the Journal of Labor Economics. Economists led by the University of Warwick’s Andrew Oswald found that experimentally inducing happiness in randomly selected individuals led to an approximately 12% increase in their pay-related productivity as compared with other individuals who were allowed to remain in their pre-existing mood state.

Some people think of emotions such as joy and contentment as ephemeral and therefore inconsequential. However, data collected in countries as varied as the UK, the US and Japan strongly suggest that even something as seemingly trivial as watching a humorous video can measurably boost people’s performance.

A major implication of the research is that happiness and job satisfaction are not mere consequences of earning more money. Instead, it’s important to be happy and satisfied in your work so that you can be productive, perform well and ultimately earn more and get promoted.

In practical terms, then, look for work that will keep you mentally engaged. If you find your work interesting and the working environment enjoyable, you’re more likely to be able to concentrate on getting good results.

In contrast, avoid taking a high-paying job if you suspect the work will be a chore. If you feel bored, how likely is it that you will be able to work productively? If you do not enjoy your work, it is more likely you will procrastinate or allow yourself to be sidetracked by distractions.

One notable study led by researcher Brent Roberts at the University of Illinois at Urbana-Champaign found that 18-year-olds who were happy were more likely to be working in prestigious jobs and to feel financially secure eight years later aged 26. Their subjective success (ie happiness) was a significant factor in determining their objective success (ie job prestige and wealth).

However, the 26-year-olds who acquired higher-status jobs also became happier and more self-confident, suggesting that their objective success contributed to higher levels of subjective success.

In other words, subjective and objective success likely affect each other reciprocally – each helps the other in a virtuous upward spiral. But the point remains that happiness is still highly important in enabling objective success: people are more likely to make progress in their careers when they feel engaged and fulfilled in their work.

The realities of work

Over the months and years of your career, being mostly happy in your work will likely improve your chances of career progression and earnings growth. However, you cannot expect to love every minute of your work. You will sometimes be required to do tasks you do not enjoy, and encounter irrational or unfair constraints that you must accept.

You cannot expect to be happy 100% of the time. Successful employees show their respect for senior folks, make concessions, and adapt to problems and challenges (see the ‘Navigating the modern workplace’ panel above). However, remember as you move from role to role and organisation to organisation that feeling engaged and mostly enjoying your work will maximise your chances of progressing in your career, too.

Author: Dr Rob Yeung is a psychologist and coach at consulting firm Talentspace