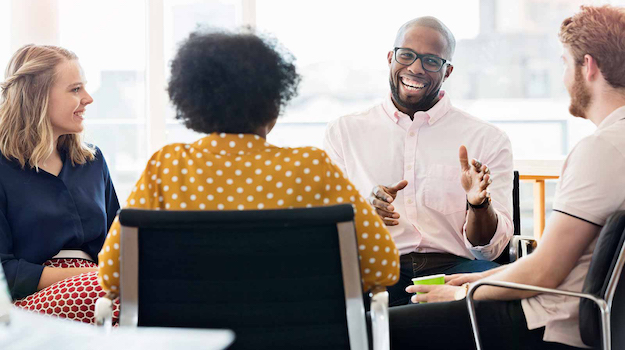 How do you think your colleagues would describe you in terms of your professionalism and readiness for promotion? Making a good impression is not simply about communicating facts and figures clearly.

Research studies confirm that body language – the combination of our physical movements, gestures and facial expressions – makes a material difference to the impact we have on the people around us.

Here are five research-based facts on how to be more influential in the workplace.

We are capable of making an immeasurable number of gestures with our hands. However, one study points to several basic gestures that may help us to impress our colleagues. Researchers led by Linda Talley at Jones International University asked experimental participants to watch videos in which a male speaker used one of three types of hand gestures:

By monitoring viewers’ reactions, the researchers discovered that the positive hand gestures were rated as most likeable. So, if you want to make a confident, encouraging impact on people at work, aim to use positive gestures rather than defensive gestures or no gestures.

Amazingly, body language may affect people even when they are unable to see us. Several studies have found that listeners on voice-only calls have been able to detect differences in speakers’ voices. In one investigation led by Amy Drahota at the University of Portsmouth, listeners were able to tell when speakers were smiling or not smiling. In a separate experiment headed by Wim Pouw at the University of Connecticut, listeners were able to distinguish between speakers who either moved their hands or stayed still.

Listeners can probably tell the difference because moving our mouths (in a smile) affects the way sound exits our faces. Similarly, moving our hands contracts and expands muscles in our torsos, which affect the quality of the sounds we produce.

So, don’t assume that you can be more passive on voice-only calls. Your facial expressions and hand gestures affect the quality of your sound. To make a strong impression then, keep your face and hands animated.

What kind of smile is appropriate in professional situations? The answer is that it depends, according to a series of investigations led by researcher Ze Wang at the University of Florida.

The research team compared the impact of either a slight smile (with only the edges of the lips turned upwards) or a broad smile (showing teeth) in sales settings. The results of their investigations showed that consumers were more persuaded by slight smiles when those consumers were considering high-risk decisions – ie they were thinking about buying complex services or goods under uncertain circumstances. However, consumers were more persuaded by broad smiles when they were considering low-risk decisions – for example, when buying simple, inexpensive services.

4. Focusing on what you say

Some alleged experts on body language have claimed that what you say (ie your words) matters less than how you say it (ie your body language). However, research proves otherwise.

Radford University researcher Keith Rasmussen Jr began a classic experiment by assembling video recordings of candidates being interviewed for a job. He then asked 80 viewers to watch the videos and rate the candidates on various criteria. Analysis of the data showed that more vigorous nonverbal behaviour (body language) was only beneficial when candidates’ interview responses were good. When candidates’ interview responses were poor, the effects of more dynamic body language were reversed and actually detrimental to how these candidates were perceived.

In other words, it matters most what you say rather than how you say it. To be most persuasive, make sure that you think carefully about your spoken arguments. Only when you are sure that your verbal content – your line of reasoning – is strong should you try to add in more body language such as the positive gestures mentioned above.

Psychologists define communication fluency as the smooth, uninterrupted flow of speech. In contrast, disfluency is characterised by disfluencies – interruptions – such as unintended, uncomfortable pauses, as well as phrases or even sounds that do not make sense.

One important finding in the research is that practice really matters. An investigation led by communication specialist Alexander Goberman at Bowling State University found that the best – most fluent – speeches tended to be given by speakers who practised sooner rather than later. That may sound obvious, but if it is genuinely so obvious, then why do all speakers not practise well in advance of an important speech rather than just before it?

In order to combine fluent words with effective body language then, consider practising for important speeches, presentations and meetings well ahead of time. When you practise, think not only about your words but also your body language. By rehearsing at least once – or even multiple times – you give yourself the best chance of communicating clearly and making a strong impression.