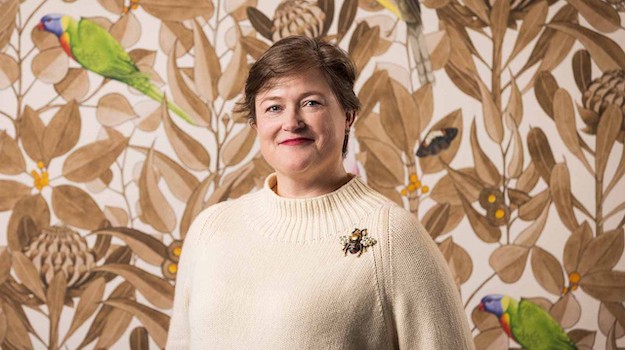 On graduating with a marketing degree, Fiona Bones FCCA had no idea how her career path would soon pivot, nor where it would take her.

What began with a series of serendipitous moments led her into the then fledgling (and notoriously male-dominated) tech sector, which then saw her relocating to Australia from her Irish birthplace and reaching the heights of senior leadership in one of the world’s technology behemoths.

And she’s loving it. Nearly 20 years into her job at Google, having risen to vice president of finance and international controller, Bones, who now manages a team of 260 across 23 jurisdictions, still marvels at her good fortune.

‘I’ve been really lucky,’ she says. ‘Joining Google when I did [in 2003], I’ve been able to consistently carve out my own place as the company has grown and diversified.’

It is, she attests, a wonderful company to work for, with a strong culture of diversity and inclusion, fabulous workplace design, plus an enviable array of employee perks and benefits. ‘And everything you’ve read about the food is true,’ she adds.

Her introduction to accounting came in her first job – in the government’s fisheries department in Galway, Ireland – where, somewhat incongruously for a marketing graduate, she was ‘handed some spreadsheets, and wound up helping with the implementation of a new finance system’.

Enjoying the work, she decided to qualify as an accountant. She found an ACCA sponsor in the organisation and did her training there.

An opportunity in Ireland with Siebel Systems, a Silicon Valley-based software company later acquired by Oracle, whetted her appetite for the tech sector. It was the year 2000, still early days for the digital economy, and she was excited by this new business model.

Although happy at Siebel, she has, she says, a habit of ‘scanning the horizon’ for new opportunities. Emergent Google was on everyone’s radar, and when she joined the business as an accountant in 2003, it soon offered the opportunity to relocate to Sydney, Australia. Already married to an Australian, she ‘jumped at the chance’.

The gender gap still exists in the tech industry. In 2021, women held only a quarter of all tech roles across the Big Five (Google, Apple, Facebook, Amazon and Microsoft) workforce, according to Statista. Separate Gartner research suggests that even that low number is lower across the ranks of senior leadership.

Google, says Bones, is acutely focused on bridging that gap, initiating various programmes to address the imbalance and encouraging more women into tech roles. She is proud that her employer is open and transparent around gender equality, while acknowledging that the issue in the tech sector ‘is decades old, and is going to take a while to solve’. The key, she believes, lies in having open conversations around the topic and in creating an environment where everyone feels comfortable.

She says that finance professionals have plenty to bring to tech businesses. ‘Accounting skills are relevant for breaking down large problems into milestones, or bite-sized pieces, and interpreting data is important in providing insights for making good decisions. These unique skillsets accountants possess are a real advantage.’

With technology transforming the accounting sector overall, nowhere is this more apparent than at Google itself.

‘Machine learning has been adopted in all areas of finance, from how we close the books to managing risk and outlier detection,’ Bones explains. ‘Possibly the greatest achievement of this has been improved quality of the upstream data that is key for all of our reporting.’

Automation hasn’t meant a downsizing of Google’s finance team. ‘Technical accounting is about freeing up people to do more meaningful work,’ Bones says. ‘There is a significant need for technical accounting, and as our regulatory environment gathers pace we need to be on top of that. It’s about people doing the right work – that’s where technology has given us relief.’

With her own job involving much international travel pre-Covid, does she think the pandemic has changed business travel forever? ‘I do think there’s huge value in connection,’ she says. ‘One thing we missed during the pandemic was a lot of the incidental interactions you get by coming together face to face that add a lot of value to your day. That’s how innovation happens.

‘However, it’s now been proven that we can be very effective working remotely. And the reality with travel is that it does come at an environmental, productivity and personal cost. At Google, we’re rethinking the mix, and going with a hybrid approach. We get the flexibility a lot of people want and crave, and the ability to work together and problem-solve collaboratively.’

Her ACCA qualification has served her well, laying a solid foundation for a career not only in finance but across the wider business community. ‘I know many members who have used their qualification as a launchpad to do completely different things,’ she says.

More than anything, she adds, the ongoing professional development, support and training ACCA offers is of great value in an environment where change is accelerating.

Although ‘always very ambitious’, she baulks at the notion of climbing a career ladder. ‘I never had an end game in mind,’ she explains. ‘I’ve consistently had a drive to do more and be better. I don’t think I chased a particular thing, but I really liked what I did and the opportunity [at Google] was apparent.’

Bones doesn’t keep track of the hours she works. ‘I love my work – it adds to my life overall,’ she says. This plays out at home, where the married partners support each other in their professional and personal lives. ‘I think being interested in what each other does, and talking about our day sets a positive example to our two children as well,’ she says.

Although she’s successfully risen through the ranks, ‘climbing the career ladder’ is a term that grates. ‘It’s not a ladder,’ she explains. ‘It’s important to remember there are many different directions your career can go in.

‘Mine started in marketing, and I couldn’t have predicted the path it would take, or the opportunities that were not even imagined 20 years ago. It’s difficult to recognise in the moment how much we’re learning, but, looking back, there’s been value in all of the positions I have had.’

She sums up by asking: ‘How can we know the dancer from the dance?’ It’s a quote – her favourite line – from the WB Yeats poem Among School Children. ‘I have always interpreted this as nothing works well in isolation. There is no one thing that makes us successful; it is a combination of internal and external factors. So when the right opportunity comes along, just be ready to dance.’

This article was first published in AB magazine August 2022