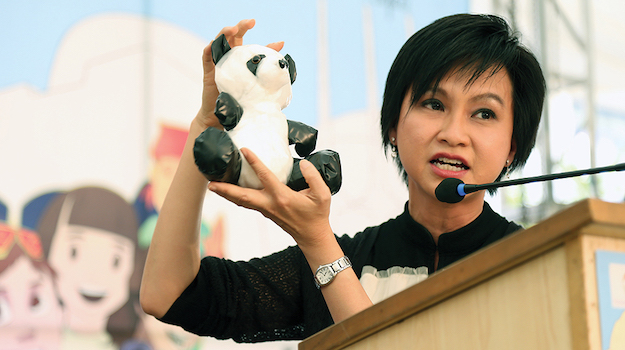 During a visit to the Korangi area of Karachi, Pakistan, in 2013, Hong Kong-based CFO Quin SQ Thong FCCA was teaching a class of children about financial literacy when a boy raised his hand and gave her a ‘eureka’ moment.

‘As part of my lesson, I asked children what they needed and what they wanted. So this tiny boy, maybe eight years old, put up his hand and said: “Miss, I want a sweet, though I need a book.” I’d never heard the contrast put so well. But it also made me think: what book could I give him to transform his life?’

There weren’t many foreigners going to impoverished places like Korangi, not least to teach children about managing finances, and her visit made a splash. The following day the CEO of one of the country’s biggest banks got in touch to suggest she write a book on financial literacy for children.

The seed was sown, but Quin wasn’t a writer, though she had authored an illustrated book called Weaving Rainbows in the Himalayas – The Art of Bhutanese Scarf Tying for her social enterprise in Bhutan, Ana by Karma, which helps women scarf weavers make a living from their work.

While Quin mulled it all over back in Hong Kong, a friend introduced her to fellow FCCA Malik Mirza, a CFO based in Islamabad. They had much in common, not least a shared passion for communicating and educating. Mirza had also worked on social programmes and was the author of a book on time management: Time Flies – Do You Want to Take a Ride?

It made perfect sense to collaborate, but that’s easier said than done when you’ve never met, barely know each other, and not only live in different countries but in different time zones.

Still, encouraged by a chance meeting with Ameena Saiyid, Oxford University Press Pakistan’s managing director, they set out on a journey to write Cha Cha and the Forest of Wisdom: The Art of Wealth Management, a book on financial literacy for children.

They say that ACCA membership was key in getting the project off the ground. ‘I realised for the first time that having a global qualification matters,’ says Mirza. ‘It meant that Quin could relate to me, which was the first step to us working together – this was truly exciting. Knowing he’s an accountant, an ACCA, I felt a fraternal bond, as though we went to the same school,’ says Quin.

Little had been written in the way of material for financial literacy for children, says Mirza. ‘We realised that we should produce something that takes children through the key concepts of sharing, spending and saving.’

Via early morning Skype calls, emails and WhatsApp messages, they plugged away. Quin’s teaching experience gave the book its direction, while Mirza developed and wrote the stories.

First they developed the characters. According to Chinese folklore, a Ming dynasty empress used pandas as diplomats, and Quin had successfully used the animal during lessons to represent a level-headed ‘guide’ figure. They decided on the name Cha Cha for the panda, which means uncle in Urdu and wise man in Chinese.

They also felt the book should have a boy and a girl, to make it relatable to as many children as possible. They called the girl Aimee and the boy Sam – names that are not culturally or linguistically exclusive.

The book follows Cha Cha as he guides the pair through the key principles of financial literacy: wealth is more than money; the difference between need and want; saving, spending and sharing; and setting goals.

After 18 months of work, the book was launched at the Children’s Literature Festival in Karachi in February 2016 and published by Oxford University Press. The concepts that it uses are aligned with the World Bank’s vision of financial inclusivity – UFA 2020, which stands for Universal Financial Access by 2020.

According to the World Bank, ‘UFA 2020 envisions that adults worldwide – women and men alike – will be able to have access to a transaction account or an electronic instrument to store money, send payments and receive deposits as the basic building block to manage their financial lives.’ The plan targets giving access to a transaction account to a billion people in 25 countries where 73% of all financially excluded people live.

‘In Pakistan only about 12% to 13% of people have a bank account,’ says Mirza. ‘So the idea is to do something that contributes to changing this. If we want adults to have bank accounts, the right time is to start early. That’s how we came up with the idea that there should be something to educate children.’

So how do children respond to concepts that many adults find difficult to grasp? ‘Very well,’ says Quin. ‘They go home and teach their parents.’

The core message of the book revolves around the concept of wealth being more than money, and encapsulates time and knowledge, and that these are equally valuable and equally tradable. ‘It’s not just about donating your money – time is wealth,’ says Quin. ‘You can share your toys or your books, or if you’re good at maths, share that knowledge with a friend at school. The concept of sharing is global and you can see a lot of kids can share a lot of their wealth.’

The authors see the book as having a global statement that can be understood across cultures, borders and economic standing. While the idea may have been sown in an emerging economy, the scope is international.

‘We’re developing this as a message, not solely as a book,’ says Quin. ‘There should be a financial literacy workbook for children, and a training programme for teachers to teach the subject in the classroom.

We’re at the stage of engaging financial institutions, governments and corporations, as they’re the people to go to schools and get the children opening accounts. The book is just the first stage.’

‘It’s been received well,’ says Mirza. ‘Parents I speak to say that these are concepts they want their children to learn and now they have something. I’m aiming for five million book sales and covering around 500 schools with the programme, spreading the message as far as possible, getting as many children with bank accounts and seeing how the international market reacts.’

If the crux of their programme is about sharing wealth, then the book itself is testament to this, with the collaboration involving a sharing of skills, strengths and vision to create something of singular value.

And the whole thing grew out of a boy putting his hand up in class. ‘One day I want to give that little boy in Korangi his own copy of the book,’ says Quin.

Quin SQ Thong FCCA is the Greater China CFO for Baronsmead Consulting, where she specialises in corporate strategy, operational excellence and performance transformation. Originally from Malaysia, she worked at PwC before moving to Hong Kong in 1998 to work as FD for TNS Global, a market research business now owned by WPP. As part of a ‘corporate doctor’ team, she then helped to revive the fortunes of then UK footwear company Texon International Group.

Following this, she moved to property company DTZ as its north Asia chief operating officer. Having impressed by engineering a five-year business plan to strengthen the company’s growth, she was seconded to DTZ’s London HQ as head of strategy, followed by a posting to Shanghai.

In 2012 she returned to Hong Kong, holding interim finance roles before taking up her current position in 2014. She also runs the social enterprise Ana by Karma.

After doing his accountancy training with PwC network firm AF Ferguson in Islamabad, Malik Mirza’s career in Pakistan took off. He moved from managing assurance and advisory services at AF Ferguson to a multinational manufacturing company as an internal audit manager.

Since 2004, the banking sector has been his stomping ground. Focusing on microfinance, he joined First Microfinance Bank as head of finance and company secretary. In 2007 he moved to Transworld Associates as a senior finance manager.

In January 2013, he moved to U Microfinance Bank as CFO and company secretary, developing the financial system to support a branchless banking system. He has recently moved to Finman Group as managing director, providing advisory, training and recruitment services.

He has created a blog for mentoring and sharing ideas from management and business books. He also runs professional skills training sessions for young people, and conducts financial analysis and management workshops.

This article was first published in AB magazine in 2016