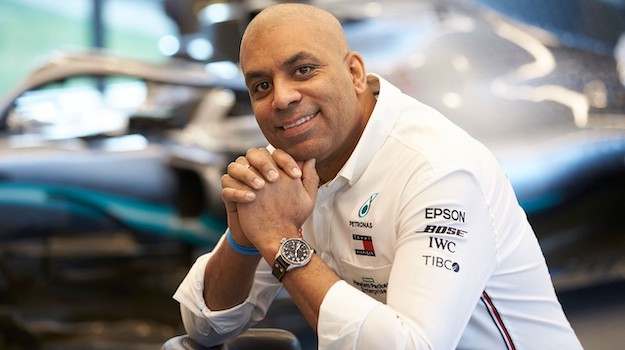 As CFO of arguably one of the greatest Formula One racing teams of all time, Russell Braithwaite FCCA is enjoying life in the financial driving seat but believes there is more to come from the Mercedes-AMG Petronas Formula One Team on the track ahead.

The numbers are impressive: seven driver and constructor championships, 106 race wins (more, if the brand’s spell in F1 during the 1950s is included), and one of the most successful drivers of all time, Sir Lewis Hamilton, back in the driving seat for the 2021 season.

Mercedes-AMG Petronas is at the pinnacle of its sport but, according to its CFO, there is more to come, as the team is only part of the way along its journey.

‘It is a journey that is in its infancy,’ he says of the team that has recently been dominant in the sport. ‘We have ambitions to be a top sports team on the track, we love being in F1 and being measured against the stopwatch, but we also want to be on top from a business point of view and to be financially sustainable.

‘We will never change our DNA of being an extremely competitive F1 team, but we have got valuable resources and skills that we can deliver for clients away from the race track too.’

These skills include deep understanding of aerodynamics, vehicle performance dynamics and engineering – in fact, everything that goes into making the F1 team work.

‘We can look at the problem a business has, then look at the array of skills we have and apply our expertise across different industries,’ he says, adding that Mercedes F1's Applied Science division has been working with Ineos Team UK in preparation for the 36th America’s Cup.

Braithwaite joined the Northamptonshire-based F1 team in 2018 as it was on its way to a fifth successive world championship. Mercedes-Benz was already ingrained in his career; having joined parent company Daimler in 2002 as a financial controller in the UK, he shifted gear to become general manager of operational excellence and distribution of Mercedes-Benz before spending seven years in Dubai as CFO of the brand’s Middle East operations, understandably a significant market for the luxury marque.

But it is clear what drew the Leicester University graduate to join the Silver Arrows. As he says: ‘I was in the corporate environment of Mercedes anyway, but what attracted me to the F1 team was the opportunity to work with these elite talents in what is clearly a successful team, and to see a different variant of the automotive industry.

'It was an opportunity to see the real interface between sport, technology and commercial business.’

One financial sustainability issue that is about to sweep the sport is that cost cap – there has always been a considerable disparity between budgets across the teams on the grid, which has influenced the domination of a few teams – Mercedes being one of them after its acquisition of the Brawn team in 2009.

To tackle the problem, F1 had announced that the 2021 season will see a cost cap of US$145m, a figure that excludes certain costs including driver, senior executive and marketing costs. This cap will further reduce to US$140m for 2022 and US$135m for 2023, with annual inflationary adjustment after that point. It will, in effect, call a halt to a financial arms race, where only the teams with the deepest pockets can compete at the front end of the grid.

But Braithwaite doesn't see this only as a threat. ‘The cost cap has provided the opportunity for us to be very clear about what the cost base is going to be and given us a solid platform from a financial perspective – a bottom-line perspective in terms of making that sustainability really achievable,' he says.

‘This will change the business model, so that we are not in that loop where you have to keep spending to perform.’

The road to success

After graduating with his degree in accountancy and ﬁnance from Leicester University, Braithwaite began studying for the ACCA Qualification as he joined RS Components, the electronic and industrial products distributor, just down the road at Corby, Northamptonshire.

After a spell with a subsidiary of ITV, he joined Daimler, ‘looking for a global opportunity’ but also admitting to his passion for cars. Originally working as a financial controller, he made the move into a general management role, where, he says, he learnt the most about the business and could make more considered decisions rather than relying on a one dimensional, financial view.

‘This was an incredibly interesting time,’ he recalls. ‘There was the cultural learning and the need to understand and navigate different business practices and the financial steering of emerging markets. I didn’t speak Arabic, so trust was critical.’ He found Dubai particularly fascinating, as there were so many different cultures all based in the one state.

On the subject of diversity, the 2020 F1 season was marked by two major issues. The first was the Covid-19 pandemic and how the series was actually going to be run, if at all. The second was the clear and visible stance that Hamilton took on Black Lives Matter and the lack of diversity in F1.

‘We fully support Lewis in what he’s standing for, and as a company we have embraced the topic, and you can see that most obviously by the colour of the car, black, which is a representation of our overall commitment to greater diversity and inclusion,’ Braithwaite says. ‘At Mercedes F1, we have set ourselves clear objectives through our Accelerate 25 programme, such as making sure that 25% of new starters come from diverse backgrounds each year until the end of 2025.’

The pandemic itself in 2020 was, he says, a critical time for the finance team to stand up and be counted. ‘We needed to protect the business and cashflow,' he says. 'We carried out a lot of financial modelling, and looked at the longevity of the company if there were to be no races. Then it became about how to operate safely and help the team deliver a season of races.’

During that time, no one was furloughed, even though around 30% of the prize money had been lost due to the Covid-19 calendar disruption that delayed the start to the season. The team worked together with the sport to deliver the safe season, keeping its sponsors satisfied, and was even able to offer virtual forms of hospitality on race weekends.

Of the finance team, Braithwaite says, ‘We are a critical stakeholder in decision-making, and we always try to find the best value decisions, which is very often not the cheapest one,’ he says, while admitting that he sometimes winces at the thought of the cost when one of the drivers takes the car for a trip off the circuit.

Braithwaite is looking forward to a more ‘traditional season’ this year, though he predicts big changes in 2022 when new regulations affecting the design of the cars will come into force.

Hamilton has, of course, only recently signed a one-year extension to his contract, so will be taking his seat in the car for 2021. Prior to this announcement, Braithwaite was adamant that there would be Mercedes drivers on the grid, ‘even if I’m driving one myself!’

Now that Hamilton has beaten him to the seat, Braithwaite will be spending his spare time restoring a 1992 Peugeot 205 GTI (his first car, for the record, was an Audi 80 Sport), at least if his three children allow him the time. But come race weekends, he’ll be focusing on his team’s performance, on and off the track. ‘It’s a seven-day-a-week job, but that’s OK because we love it!’

7
Number of driver championships (plus two in the 1950s)